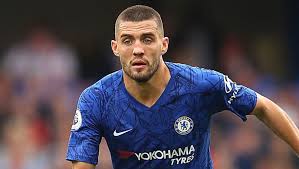 Chelsea midfielder Mateo Kovačić believes Blues boss Frank Lampard is similar to Real Madrid manager Zinedine Zidane as a coach.The Croatian has pinpointed Lampard’s coaching approach as the reason why he is thriving at Stamford Bridge this season, and adds his style is reminiscent of former coach Zizou. Kovačić played under the Frenchman during his time in the Spanish capital and revealed that both him and Lampard adopt methods that complement his style of play.

Mateo Kovačić said “Zidane was similar to the way Frank Lampard is as a coach, and their approaches really suit me. It was nice to play under Zidane, but I thought he could have given me a deserved opportunity in the third ​Champions League final. That was the main reason for my dissatisfaction, but that’s football and we parted with no bad feelings. I came to Chelsea under Sarri, but I must say that Lampard is an exceptional manager,” he said. “He has kept the character he had as a player in his personality as a coach, which has inspired all of us. He commits himself with everything he’s got. Training is always challenging and different from last season.”

Kovačić has been one of Chelsea’s standout performers this season and his influence in the team continues to grow. Often a deep-lying central midfielder, Kovačić has been given more of a licence to roam this campaign, with the ex-Madrid star is relishing the chance to express himself.

Kepa Arrizabalaga is determined to fight for his Chelsea place as he battles to be Spain No1 for the Euros. The world’s most expensive keeper was stunned by Frank Lampard’s bombshell decision to axe him at Leicester in last match.

Frank Lampard said “Kepa Arrizabalaga will be honest there have been some mistakes that have cost us goals. It is the nature of it, so that needs to improve.”

The Spain No 1 is worried about holding on to his place in a race with David De Gea to be first choice at Euro 2020.

Frank Lampard made no secret of his desire to bring in attacking reinforcements this January, but the Blues failed to sign a single player before last Friday’s transfer deadline. This week his main striker – Tammy Abraham admitted it ‘would have been nice’ if Edinson Cavani had joined Chelsea as he feels he could have learned so much from the veteran striker.

Tammy Abraham said “The players we were talking about bringing in were like Cavani and other top class strikers who have been around the game for many years,’ Abraham said. ‘It would have been nice if he had come. He would have been someone I can learn off and steal his ideas to add to my own. ‘It didn’t happen though and for me it gives me that extra push and desire to claim my position and be as best as I can.

Paris Saint-Germain forward Cavani, 32, who is out of contract at the end of the season, was heavily linked with both Chelsea and Manchester United towards the end of the window. The Uruguayan will see out the remainder of the campaign with PSG and will likely complete a free transfer in the summer.

#PremierLeagueStories @ManCity – After #ClaudioRanieri, #PepGuardiola takes the title of tinker man with 76 team changes + #KevinDeBruyne Real Madrid interest ( and other Manchester City stories)
#PremierLeagueStories @SouthamptonFC – #CedricSoares and #MayaYoshida leave after years of service but without farewell , Unhappy #KevinDanso not able to leave ( and other Southampton stories )
We use cookies on our website to give you the most relevant experience by remembering your preferences and repeat visits. By clicking “Accept”, you consent to the use of ALL the cookies.
Do not sell my personal information.
Cookie settingsACCEPT
Privacy & Cookies Policy