#mustread #PremierLeagueStories on Jan 7 2020 – Why Brighton legend #GlenMurray is not in #GrahamPotter plans for the season ?? 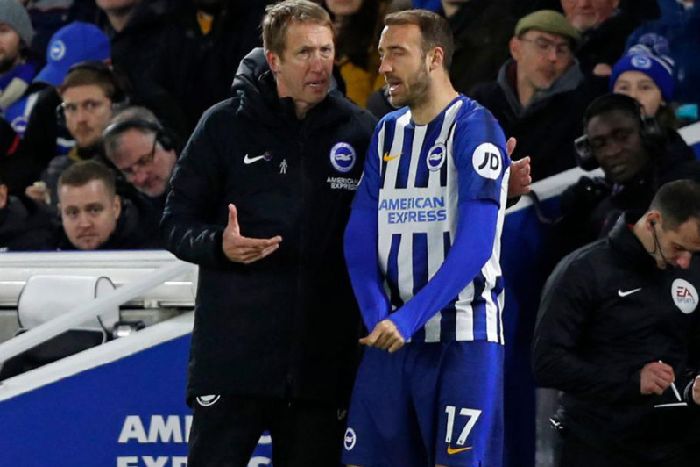 Glen Murray and Brighton have been through a heck of a lot. Most of it together. The English striker didn’t play in the Premier League until he hit 30, spending most of his career in the lower leagues of England and North America, sniffing out goals and bullying defenses wherever he went.  Now with January transfer window in it’s 2nd week, Glen Murray looks to make a final move to a club where his services can benefit someone with much needed commitment. Brighton and Hove Albion head coach Graham Potter said he would fully understand if Glenn Murray wishes to depart in the January transfer window.

Graham Potter said, “I understand he has had a fantastic career, he has been great for this club and he might want to think about getting some game time. We have to try to respect that and understand that. I have absolutely no problem with Glenn at all. If he is with us great and, if not, I can understand why as well. These are all things we can think about and speak about privately. Whatever we do, we need to make sure the players we have got are ready to play the game and committed to the game and happy to play. It’s just the January speculation and fun we all have chatting about the ifs and buts. At the same time we have to make sure we are ready for the game. He is a fantastic character. He has been great with us and helped us to get to where we are now. He has helped me with the group, with the players, trained his best all the time.

Brighton’s fierce rivals are Crystal Palace, so when Murray left Brighton for Palace in 2011, just a few months after he led Brighton to promotion to the second-tier with 22 goals, there was huge controversy. That was just the start. His 30 goals in the 2012-13 season led Palace to promotion to the Premier League, just to rub extra salt in the wounds of Brighton’s fans. After Palace, short stops were made at Bournemouth, in the Premier League, and Reading followed, but Murray jumped at the chance to return to Brighton in 2016.

The Seagulls were in the second-tier but Murray returned, initially on loan in 2016-17, and scored 26 goals to lead them to promotion to the Premier League for the first time in their history. The long and winding road led him from the far north of England to the far south, as he scored 107 goals for Brighton and became the second-highest goalscorer in club history. That hunger, and those goals, mean a section in Brighton & Hove Albion’s museum will be dedicated to Murray. He’s not in there yet, but there’s a nice blank section right in the center waiting for him.