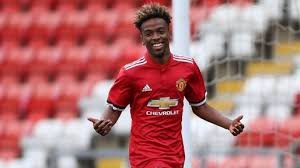 Manchester United risk losing Angel Gomes on a free transfer at the end of the season after he rejected their opening contract offer. The midfielder  is yet to agree a new deal with the club due to fears over a lack of playing time at Old Trafford.

Why is he stalling ?

Gomes has made just five appearances for the club this term and has been left out of the matchday squads for recent matches against AZ Alkmaar and Colchester. The midfielder, who joined United at the age of six, believes he’s behind in his development and wants more assurances that he will be given first team football. United have not given up hope of extending Gomes’ deal but he’s in a similar situation to fellow youngster Tahith Chong. The Dutchman is also out of contract at the end of the season but has not been frozen out in the same manner that Gomes has.

Fellow teenagers Mason Greenwood, James Garner, Brandon Williams and Tahith Chong figured across the two ties and there is no indication Gomes – who participated in open training last week – is injured.

What the club thinks ?

Manchester United’s Head of Academy Nicky Butt had outlined the next steps planned for Angel Gomes, after the youngster signed his first professional contract when he was 17 year old.  The talented midfielder was the youngest-ever recipient of the Jimmy Murphy Youth Team Player of the Year award and also youngest player since Duncan Edwards to appear for United’s first team, when he came off the bench late in the final-day win over Crystal Palace. The appearance also ensured Gomes was the first player born this Millennium to appear in the Premier League and there was genuine excitement to track his continued progress.

Manchester United has quite a few talented boys in the set up who are waiting on chances and Angel Gomes is one of them. To get him tied up to a long-term contract will be really good for our club.

The 19-year-old wants to play regularly but he would have to show patience.  Gomes is slight physically, and it was always likely going to take a bit longer for him to work his way into United’s first team. He can still get there. The question is over how patient he is willing to be. Can United convince him to sign a new deal with a genuine pathway to first team football, which might involve going out on loan?

He has shown flashes of excellence in his first team minutes, and his pre-season individual goal against Tottenham showed a tantalising glimpse of what he is capable of. Gomes has regularly captained the under-23 team and often looks too good for that level. He needs to be tested with first team football.

This may also become one of the notable achievements of Ole if he can somehow win over Angel Gomes and avoid Pogba 2.0 … Perhaps ???

#mustread #PremierLeagueStories on Dec 19 1992 – Why #BrightonFC ‘s in-form striker #NealMaupay frustrated ?
#mustread #PremierLeagueStories on Dec 20 2019 – #BurnleyFC boss #SeanDyche anticipates another tough January transfer window
We use cookies on our website to give you the most relevant experience by remembering your preferences and repeat visits. By clicking “Accept”, you consent to the use of ALL the cookies.
Do not sell my personal information.
Cookie settingsACCEPT
Privacy & Cookies Policy