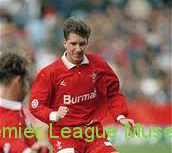 Everton looked like adding to Swindon’s premiership gloom until a last minute equalizer from home skipper Shaun Taylor earned the hosts a point. Howard Kendall’s side were in control throughout and should have taken all three points – but their failure to take their chances proved costly.

The Merseysiders’ chief sinner was Stuart Barlow who replace injured Paul Rideout. Swindon failed to clear Matthew Jackson’s long throw in after 27 minutes and Peter Beagrie hammered the ball into the net from 10 yards.

The luckless substitute missed a hat trick of misses to give his side another goal before being substituted himself with 10 minutes to go.