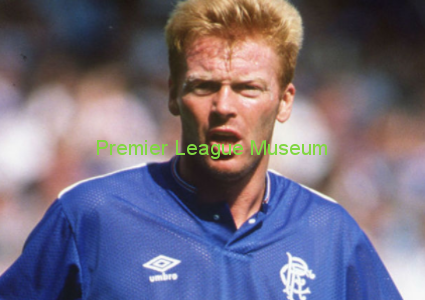 Maurice Johnston had been told that he could leave Everton for free in order to lose his £6000 a week wages from the books. Manager Howard Kendall confirmed that the club was willing to write off £1.5 million signings from two years ago.

Howard Kendall said “This is an amicable agreement and I must stress it’s a football decision and not related to anything else, managers make mistakes. There is no guarantee that however much money you pay for a player he will be a success. I have tried to resolve the situation by making Maurice available for transfer when I made up my mind he wasn’t going to start the season, knowing how desperate he was to play and how hard he had worked pre-season. Recently I alerted clubs he was available on a loan and that still hasn’t resolved the situation. Hopefully, this will enable the lad to sort his future out.”

#PLHistory #PremierLeagueStories #PL on 07 October 1993 – #GordonDurie of Tottenham punished two weeks wages by manager #OssieArdiles for using abusing language on being substituted #THFC
#PLHistory #PremierLeagueStories #PL on 07 October 1993 – Manchester United made record turnover and impressive profits on the back of a successful season on the pitch #MUFC
%d bloggers like this: