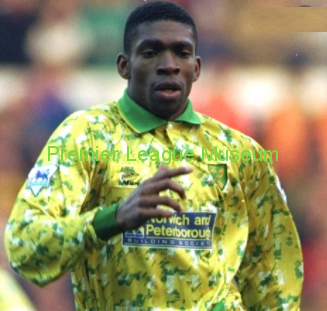 Efan Ekoku put the dampner on Everton’s spirits after the Merseyside derby triumph over Liverpool a week earlier. The Manchester-born striker struck four times in half an hour, either side of the break to cut short Everton’s joy of taking a 14th-minute lead through Paul Rideout.

And when Chris Sutton added a fifth for Norwich 13 minutes from time it summed up a day of drastically fluctuation fortunes at Everton. The season of inconsistencies continued for Howard Kendall’s men who suffered one of their heaviest defeats at home in years.

#PLHistory #PremierLeagueStories #PL on 24 September 1993 – Southampton manager #IanBranfoot was struggling to put a side together against Arsenal due to injuries #SaintsFC
#PLHistory #PremierLeagueStories #PL on 25 September 1993 – Manchester United 4 – Swindon Town 2 #AlexFerguson unhappy about his side’s careless ending to the game #MUFC #SwindonTown
%d bloggers like this: