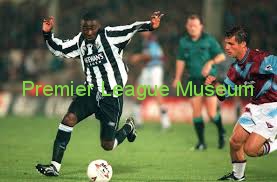 Andy Cole was going back to Swindon Town, a ground where he had a dismal start to his Newcastle career in a black and white shirt. Cole had scored 17 goals from 18 starts for the Tyneside club and that season he was tied with Teddy Sheringham and Ian Wright at the top of the goal-scoring starts, but he remembered the day when he had made his debut for Newcastle at Swindon.

Andy Cole said “My debut for Newcastle wasn’t a very nice experience. Because I was a former Bristol City player I was booed when I was sitting in the dugout and of course we lost 2-1. But I could hardly be in better nick going back to Swindon with four goals in my last three games. It would not only be nice to be leading scorer by tomorrow night but to stay there for the rest of season.”