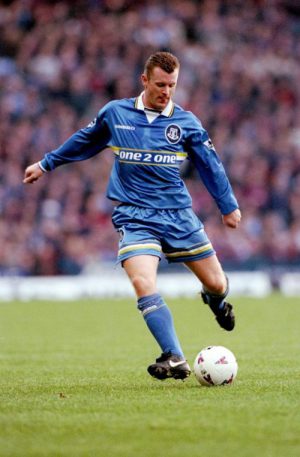 Graham Stuart had a frenetic introduction to life at Goodison Park with playing four matches in first 10 days but since he was dropped for the match against Oldham, the £850000 signing did not have much to do since then. His problem that season had been lack of match fitness and Stuart was desperate to put that straight.

Graham Stuart said “It’s so frustrating. I want to do well and I want to show people what I can do. But it’s embarrassing when you know what you want to do and your legs won’t let you do it. May be playing against Liverpool would give me that little gee up, but it’s in games like that when you need your match fitness most because that kind of matches is so fast. I did all the pre-season training with Chelsea but because I wasn’t in Glenn Hoddle’s plans I didn’t play any full matches. I was getting on for the last 25 minutes and my match sharpness suffered. One of the reasons the boss signed me was because I score goals from midfield and I haven’t done that so far. I had a chance in my first game but I could not finish it. Confidence is an important part of a player’s repertoire.”