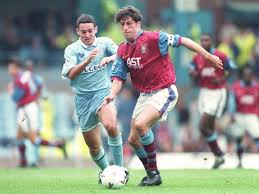 Aston Villa’s new recruit and captain Andy Townsend had adjusted well to life in the midlands. But he admitted that leaving Stamford Bridge was one of the toughest decisions he had ever made and still had not come to terms with calling Chelsea supporters “their” and not “ours”. But he said club’s lack of ambition and mid-table mediocrity finally was the reason he moved to Villa.

Andy Townsend said “It wasn’t an easy decision to make. Chelsea were the team I supported as a boy, I genuinely loved the club – still do in many ways for just last week I had to correct myself when I referred to “their” supporters as “ours”. In my three seasons at Stamford Bridge I made some good friends, was always well treated by the support – a great support – but but, Ultimately, I suppose it was the frustration. Three seasons of reading about Man United, Arsenal at the top and Forest, Oldham at the bottom. Us stuck in the middle, aimlessly drifting as if we didn’t exist. No medals, no cups, no glory, just the centre of the doughnout.”

#PLHistory #PremierLeagueStories #PL on 04 September 1993 – #GraemeSouness Thankful for the Support given by Liverpool Board and Promised that Trophies would Return soon #LFC
#PLHistory #PremierLeagueStories #PL on 04 September 1993 – Coventry Striker #MickQuinn revealed that he had Put Money on Liverpool Winning the Title that season
We use cookies on our website to give you the most relevant experience by remembering your preferences and repeat visits. By clicking “Accept”, you consent to the use of ALL the cookies.
Do not sell my personal information.
Cookie settingsACCEPT
Privacy & Cookies Policy