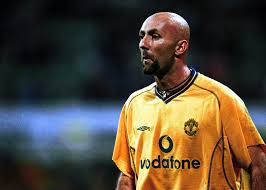 Marseille and French football star William Prunier fueled the transfer fire by openly stating that he would love to come and play in the premier league and would be open to moving to the Merseyside Blues. Everton’s Howard Kendall was thought to be a big fan of the player and the Frenchman responded to the rumours.

William Prunier said “I know of Everton’s interest because I have someone who handles my affairs. Everton are a big club eventhough they have disappointed in their championship this year. Here we knowthat the title will always be between Marseille, Monaco and PSG but its not like that in England. They are many teams fighting hard for the title.”

#PLHistory #premierleaguestories #PL on April 7 1993 – Manchester United #MUFC declared £4.6 million in profits for the first six months of that financial year
#PLHistory #premierleaguestories #PL on April 8 1993 – Nottingham Forest doomed to go down with another defeat against Blackburn Rovers in #relegationbattle (and other #matchday stories)
We use cookies on our website to give you the most relevant experience by remembering your preferences and repeat visits. By clicking “Accept”, you consent to the use of ALL the cookies.
Do not sell my personal information.
Cookie settingsACCEPT
Privacy & Cookies Policy