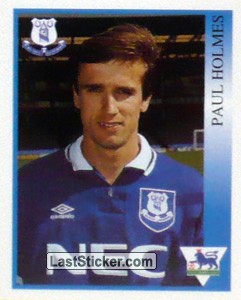 Everton had been struggling for defensive reinforcement ever since they let go of Martin Keown to Arsenal in a £3 million transfer. They had also sold Kevin Ratcliffe to Dundee and occasional right wing-back, Pat Nevin, to Tranmere. As the performances went down, the club had been under pressure to spend some of the money that they had received from the sales and Howard Kendall finally decided to bring Birmingham’s right back Paul Holmes to the club.

In a deal believed to be around £100000, Kendall was getting a player who was just 25 and had actually just scored for the Everton reserves a day earlier. The talented Wortley born defender’s value had gone down rapidly after a knee ligament injury that season and Kendall was banking on him getting back to his best.

Howard Kendall said “We had Paul up last night and he played in the reserve team which won. It’s hard to assess people at that level but I’ve seen him in Birmingham’s first team. He is a good athlete and has a certain amount of experience. He will be a squad player for now and will get his chances to prove himself for the first team.”

#PLHistory #premierleaguestories on March 17 1993 – Norwich Striker #LeePower targeting Top of the Table Finish in #titlerace
#PLHistory #premierleaguestories on March 18 1993 – #MarkRobins #LeePower #IanCrook goals fire Norwich City to to the top in #TitleRace ahead of Manchester United and Aston Villa
We use cookies on our website to give you the most relevant experience by remembering your preferences and repeat visits. By clicking “Accept”, you consent to the use of ALL the cookies.
Do not sell my personal information.
Cookie settingsACCEPT
Privacy & Cookies Policy