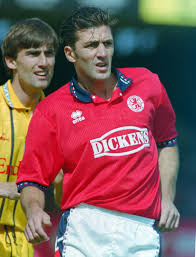 Middlesborough striker Paul Wilkinson had been charged with bringing the game into disrepute. The 11 goal top scorer was summoned to appear before a football association disciplinary tribunal in Manchester on 17 March. The charge related to an incident in the tunnel at Elland Road following the game against Leeds United on January 30.

Wilkinson is alleged to have sworn at a linesman. The matter was reported to the FA by the referee. The 28-year-old centre forward could have been banned up to three games which would be a body blow to Boro’s battle against relegation.

Manager Lennie Lawrence said “Its disappointing but we have to accept the situation and hope that the tribunal will be lenient. Wilkinson has a good disciplinary record and we hope it will count in his favour.”

#PLHistory #premierleaguestories on March 6 1993 – Liverpool Legend #IanRush Called #RyanGiggs “Title Clincher”
#PLHistory #premierleaguestories on March 6 1993 – Spurs Keeper #EricThorstvedt demanded more protection
We use cookies on our website to give you the most relevant experience by remembering your preferences and repeat visits. By clicking “Accept”, you consent to the use of ALL the cookies.
Do not sell my personal information.
Cookie settingsACCEPT
Privacy & Cookies Policy