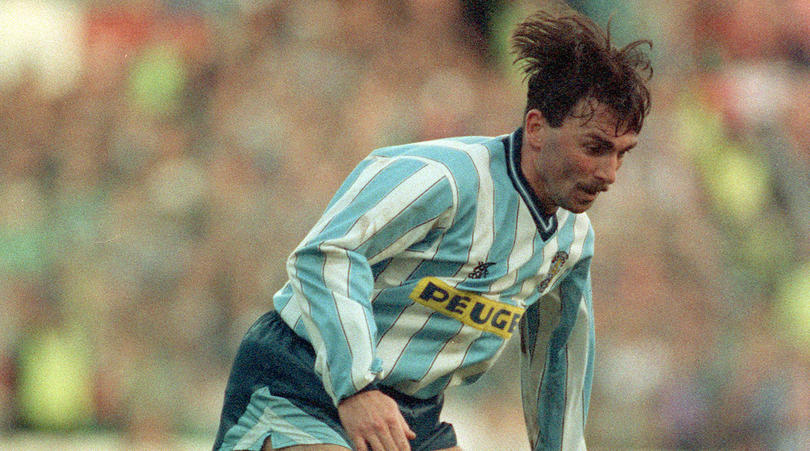 Battling sky blues ended the premier league’s most impressive run last night – thanks to a touch of Sheffield Steel. Wednesday was beaten for the first time in 16 matches and Coventry boss Bobby Gould later revealed that the victory was inspired by the Owl’s neighbours Sheffield United!

Gould took heart from United’s 6-0 drubbing of Spurs a day earlier and demanded the same commitment from his team. That is what he got as Conventry made a massive leap of five places into the fifth place and against were in spots to get European Football. Micky Gynn scored the only goal of the match.

No matter how much Kenny Dalglish portrayed that he was not a Liverpool man anymore and was fully focused on Blackburn, his opponents always saw him as a Liverpool hero and that gave Everton an extra motivation as they pulled off a huge win. The irony was that the player who apparently saved Dalglish’s job two years prior when he scored two goals to win an FA cup tie for Liverpool, Tony Cottee was the player who inflicted this loss on Blackburn.

He struck late on to give three points to Howard Kendall’s under pressure team and dealt a huge blow in Blackburn’s chances to qualify for Europe. Sherwood was dismissed with two yellows and frustrated with injuries and suspensions Dalglish commented: “We will soon be down to one aside, one a priest and one a minister.”

In an encounter which benefitted no team, Norwich and Arsenal shared a goal draw and points. Norwich felt they had dropped two points in the race for the title whereas Arsenal fell further behind in the race to play in Europe. The most interesting aspect of this game was that Ian Wright’s penalty was saved by Bryan Gunn who later on said that televised matches were the reason why he could guess where the penalty was going to be taken.

Bryan Gunn  said “In the old days, you relied on one of your teammates giving you a tip about where someone might put the ball. Now thanks to all the games on the box, they have no secret.”

Bryan Gunn’s penalty save was the fifth time Arsenal had failed to convert a penalty that season. Ian Wright did have the last laugh though after he scored his 23rd goal of the season.

Amidst report of Roy Keane on the verge of signing a new contract at Forest, he showed everyone why he was the British Football’s hottest property with a superb equalizer to scrape a point for Forest at City Ground. Keane’s first-time finish to Ian Woan’s cross gave Forest a point but they remained bottom of the table.

Palace had just scored a minute prior to Keane’s goal and they also had a chance after the break when Chris Armstrong missed a difficult chance and did not pass the ball to Chris Coleman who just had to tap in for a goal.

#PLHistory #premierleaguestories on March 3 1993 – #HowardKendall called for repeat of Everton’s performance against Blackburn Rovers
#PLHistory #premierleaguestories on March 5 1993 – Confident #AlexFerguson ready for Mersey showdown
We use cookies on our website to give you the most relevant experience by remembering your preferences and repeat visits. By clicking “Accept”, you consent to the use of ALL the cookies.
Do not sell my personal information.
Cookie settingsACCEPT
Privacy & Cookies Policy