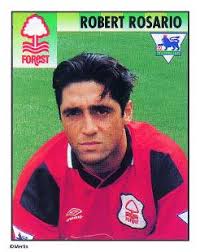 As a last throw of the dice to save their premier league season Nottingham Forest had captured the signing of Coventry striker Robert Rosario for £400000. The 26-year-old former Norwich player completed all the formalities of his move to the City ground that morning after talks with Forest’s assistant manager Ron Fenton.

Rosario was set to go straight into the line up for their match against Crystal Palace a day later. Forest and their manager Brian Clough were under extreme pressure to not get relegated that year and with goals being hard to come by they were hoping that addition of Rosario would provide a much-needed boost for them.