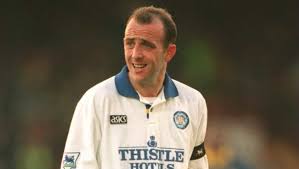 Leeds United captain Garry McAllister had signed a three-year extension to his current contract after discussions with club manager Howard Wilkinson. McAllister, 28 had joined Leeds from Leicester City for £1 million in the summer of 1990 and had not missed a single league game since.

Howard Wilkinson said “I am pleased that Gary has shown his faith in the club’s future by agreeing to stay.”

After winning the league in 1991-92 season, Leeds had a terrible season in the following year and were struggling mid-table in the league but Wilkinson was confident that it was a minor blip and the club would soon get back to competing for titles in England and Europe.

#PLHistory #premierleaguestories on Feb 23 1993 – Ex Manchester United Calls #VinnieJones a #Psychopath
#PLHistory #premierleaguestories on Feb 24 1993 – We are not in the title chase – Sheffield Wednesday Manager #TrevorFrancis plays down expectations
We use cookies on our website to give you the most relevant experience by remembering your preferences and repeat visits. By clicking “Accept”, you consent to the use of ALL the cookies.
Do not sell my personal information.
Cookie settingsACCEPT
Privacy & Cookies Policy